It’s a wonderful quirk of fate that an exhibition contemplating the beauty of light should take place at a sun-drenched seaside shopping complex that has long been left unoccupied.

Curated by writer Caroline Ha Thuc and presented by the curatorial office Mur Nomade, this Le French May programme brings together two artists — both primarily known for their tranquil landscape and still-life paintings — through a cultural exchange programme.

Mahon once stayed in Hong Kong for several weeks, whereas Lai arranged to visit France on a research grant in December 2013. 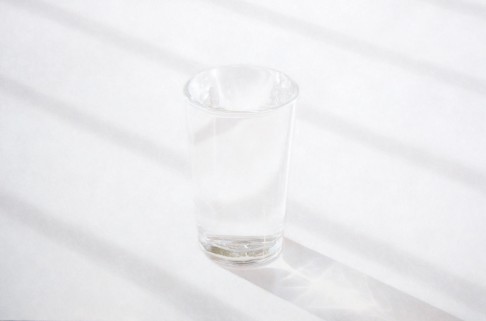 « We had an email dialogue about the kind of works we have been doing, the ideas developed recently, and the things I saw in France, » says Lai.

At the exhibition, Mahon will showcase his poetically rendered paintings of landscapes, which range from a panoramic view of Hong Kong to gorgeous images of nature. Lai, meanwhile, will continue her survey of the qualities of stillness in her relatively mundane subject matter, such as water glasses in sunlight, and the surface of the sea.

The still-life painter finds it easiest to project her feelings onto her work when the scenes she depicts are at their simplest.

« If you reduce my painting to words, it’s just a glass under some beautiful lighting, » says Lai. « But if you look at the painting itself, you can see that it’s different from all the other glasses you normally see. That’s the point of looking at my paintings in person. »

Confusion, density, constant rush and overwhelming material lives: our ability to ‘read’ / understand/ perceive the everyday world is being challenged.  Our ‘fragmented’ lives are more and more deprived of any understandable context and we desperately look for the power to take control back. In an apparent ambivalent attitude, we therefore become insensitive while still in the dire need of more sense. Mirroring our society, the artist’s work is at the heart of this and we today introduce Sébastien Mahon, a French painter settled in Beijing in 2008. His work is a questioning on the relationship between man and nature, social structures and natural balance. His painting stresses on the unconscious struggle of humanity to find its place and its genuine need of harmony.

«The painter’s world is a visible world, nothing but visible, a world close to madness, as it is complete yet only being partial » (1).

Sébastien MAHON’s paintings first strike is this madness, challenging perspective laws making them collide and willing to embrace the whole reality: things step over each other, lines cross, masses rise and breathe. The artist draws and stretches base lines, tensing reality and its shapes, creating dizzy asperities: from a completely flat space, he rears up mountains, heavens and buildings, in a perfectly controlled swirl.  The space presented is a whole space, with no stash, resulting from a long fight between structure and imbalance: willfully flat and totally present, absolutely offered, revealed by colours and light.

From the 17th century scientific revolutions, one knows space structure is subjective. There is no order in the world neither straight axis or origin. The relativity theory completed to confuse us towards reality. Though, those – too much – revolutionary ideas, do not alter our everyday perception of the real. The artists do never stop to explore its implications and smash our visual marks. The resulting fragmentation might seem chaotic, but the artist himself then stands as the new landmark.

Out of any useless perspective, this is this free vision Sébastien Mahon is seeking: the artist do not accept any flat horizon line, neither any horizon.

In a shooting gesture, he loses control, disorganize reality to let it find its own place back, step by step. The painting’s consistency does not result from a conventional perception, but from the more profound, personal artist’s order.

Sébastien Mahon is living with the old sorrow of being left alone in a nursery: he was crying while drawing wagons, their size going smaller with his tears, discovering the train line.

He still today keeps this working process, building his paintings from a detail, an isolated growing element around which the painting emerge. Photographs, images or insignificant details: he’s feeding himself with these emotional ingredients, opening on undisclosed worlds like a Pandora box. Follows a fight between the painter and reality, between chaos and harmony… The artist is looking for an axis and a goal, like a quest towards a new golden angle. One can feel like a layered process on his canvasses, leading to unity. The thickness of the matter witnesses the artists’ fight gestures against the pictorial matter, figuring mankind’s hand-to-hand fight against the world in order to find its place.

Paradoxically, this absolute flatness and lack of perspective reveal a lot of shape and volumes.

On Shine on your crazy (2011), the painter drew base lines in order to divide the light spaces, like on a sundial.  He worked out various colours in a way to stimulate the eye, playing on optical dynamics and surfaces in motion, through colours juxtaposition and space dividing.

How light plays on painting fascinates him. He translates it sometimes in drawing tiny spirals, a way to show the dancing photons. A visual buzz he relates to Buddhist Tibetan prays. The sky is like always damaged, showing bites or scraper marks. Most of the time, the artist pairs orange and blue colours in the sky, playing with one another. His colour palette is often the same, with earthy and raw tones. One can smell this brown earth and greenery scents. Earth, sea, mountains seem always like inflated. No outline, the colours make the shapes, even if they don’t seem to be contained: this overflow embodies the permanent fight between light and colour, which the artist wants to report.

Earth contortion, air streams, living surface of the sea: the major natural elements are in a constant power struggle. The artist therefore aims at finding a common ground, the very balance one can find in nature.

Madness doesn’t only show within the painting construction, but also in its characters. Men, like dancing creatures, seem to play heedless, even reckless games (which game are they playing? Can we play on an Earthquake ?). They seem like a feasting crowd who laugh of Zarathustra’s speech, an unconscious crowd, even unconscious of itself, of the last living men. As everything is a game, nothing seems reel. Even servicemen marching on a worksite: in one second they’ll laugh and take off their uniforms. Moreover, Excelsior shows Superman on a golf course, overlooking a contemporary Metropolis-like sky-scrapers city.

Without any sense of reality, Sébastien Mahon is painting lands of confusion and amnesia, as a laughter on a dream once done.  Without doubt is there something from the Asian laugh, a sweet irony towards the Occidental mindset. Men are like small frozen ghosts, their existence reduced to a narrowed time scale, while it seems the landscape has been in motion for half a century.

The painter shows his landscape painting as an epitaph to the esthetics of utopia, to the Garden of Eden’s mankind history, in its original symbiosis with Nature. Today are the relationships between man and the nature deeply challenged. The artist wants anyway to keep a part of innocence and poetry in his work like a wishful thinking, in opposition to the current pessimism. His stance in his landscape painting goes more metaphysical, as he’s seeking to find this movement and staggered time relationship between man and his environment.

Au Réveil de la Dune (2012) stresses on how Sébastien Mahon considers this link between man and nature. A few brown figures stand out a monochromatic brown background, at the bottom of the dune. One can imagine a soccer play, Over their head, the dune awakes…. a Sunday walk. Men are bare-chested and, lower, there’s a flapping white shirt. All these men are small, weak and like frozen in front of this immensity looking down on them. Over their head, the dune awakes… like a mountain, a huge mass with cutting edges and undefined brown outlines: what men don’t see is those hidden swirl, cliffs and abysses, hidden asperities bubbling on the other side.

Over their head, the dune awakes… like a mountain, a huge mass with cutting edges and undefined brown outlines: what men don’t see is those hidden swirl, cliffs and abysses, hidden asperities bubbling on the other side. It’s not men looking at the mountain anymore, but the mountain observing and overhanging them. But there’s no threat neither apparent danger: one doesn’t feel any struggle between man and nature, moreover there’s a strange cohabiting, born to a tacit agreement. With his constant denial of perspectives, the artist shows every facets of this dune, therefore offering itself. Inflated by curves and spirals, one can feel it breathing, living, heavily bending over, but accepting, those men.

Sébastien Mahon never controls nature. Many of his paintings display overwhelming, space-consuming cities as a background.

Settled in Beijing in 2008, the artist frames his work as a part of our societies historical development, and more specifically China’s one. Chantier au Ciel du Pays du Centre (2009) is like a portrait of taday’s China. This is also a way to stress on his location. For him, exile is a motivation for a prolific thought and Asia offers him a different perception of the real. This painting links the idea of an organic landscape movement to the last years urban changes in China .

Painting is a medium he never quit. It is timeless and independent compared to fashion and thinking mainstreams. It is also a means to explore poetic parallel worlds, the mysteries of what he calls spectral perception of the real.

The artist was born in Alençon, France, 1970, and likes being compared to the american figurative painters. One can find those Andrew Wyeth’s browns and earthy realism, as well as the light of some Edward Hopper’s landscapes. But Peter Doïg also is one of his influencers, on his relationship to nature, or some abstract artists like Anselm Kieffer, on his work on the matter.

Sébastien Mahon doesn’t tell stories in his painting. For him, stroy-telling is secundary. It’s not about imposing a view, nor seeking a precise reaction, but to let us alone in front of the painting, in wandering thoughts. To allow us, for a while, «to rest from the real».

In terms of modeling technique, Sebastien combined realism and abstract together with collage art’s graphic method. The illogical combination of abstract background and individuals is the presentation of the mood and concepts of the artist; it’s purpose is to subvert a long standing esthetic tradition. The fascinating colour of Sebastien’s work brought great visual pleasure to the audience, and it combined the beauty of the impressionist and the force of the expressionism.

The vitality of the Sebastien’s painting lies within its spiritualism and it displayed a concern for contemporary humanitarian spiritual circumstances, something that normal landscape painting can’t achieve but fully and naturally displayed with Sebastien’s elastic brushwork. It is genuine and it abandoned the fashionable life and culture.

Sebastien’s landscape paintings condense the outline of time and space and make us forget about the passing of time. His elastic brushwork updated the decorative concept to a higher altitude that has never been reached by landscape paintings. Such elasticity is a positive response from an landscape painting artist facing dramatic changes in social and natural environment.